Alright, BlackBerry were kind to invite me for their sneak peek to their new BlackBerry line ups. To be honest, I didn’t care about their NEW line ups but I figured, “What the hey, could be a tech-related sneak peek”. Well, it wasn’t.

It didn’t take long (Compared to stuff I attended that really needed serious digestion), so I’ll summarize it for each feature that drew my interest:

Think of NFC as RFID to share data not to just ID stuff. With BlackBerry’s NFC, you can exchange files, media or contacts (BBPins, contacts and addresses) by sticking the phones back to back (Or maybe bumping). Why is this new? It’s not. At least not tech-wise… The technology existed few years back so this isn’t a biggie to the general, but it is for BlackBerry users because, well, its new to them.

Pretty much just like how Apple hyped up “facetime” saying “OMG ITS A NEW TECHNOLOGY”… To them, it is. To the world, its not (Hell, Google Talk can do it!).

You know those call marketing agencies that call and go “Congratulations! You won a Samsung Galaxy with a coupons booklet worth OVER 9000KD!! Just pay 50KD to get them” and then hand you a Chinese knock-off Samfung phone (Yes, according to a friend of mine, Samfung) and a coupons booklet filled with makeup coupons?

Well, its not entirely the same, but the same concept. When you buy a BlackBerry device, you get discounts on few local shops here in Kuwait (And they’re growing according to what I heard\understood)

The presenters fired up a video showing how it’d be like to be used and all and, in all honesty, by the time they reach THAT OS things would’ve been too late for them. Or at least how I see it.

No real talks about technologies behind BlackBerry itself since, well, I’m not the average consumer. So I was a little bit disappointed there.

To be honest, its marketplace is still better than Windows Phone 7 😛 (Don’t care, still love my dying HTC HD7)

NFC is new to BlackBerry, BBB*nus is a serious stunt; I consider it a gimmick since I’m not interested in discounts, but others do and could find it interesting and BlackBerry 10 is probably the last card RIM can play which will decide their future.

Aah, yes, forgot to add this:
This is a picture of me, guys from Lurkerz blug and some big head from BlackBerry (Forgot his name, sorry)… I bet you saw what I did there 😛 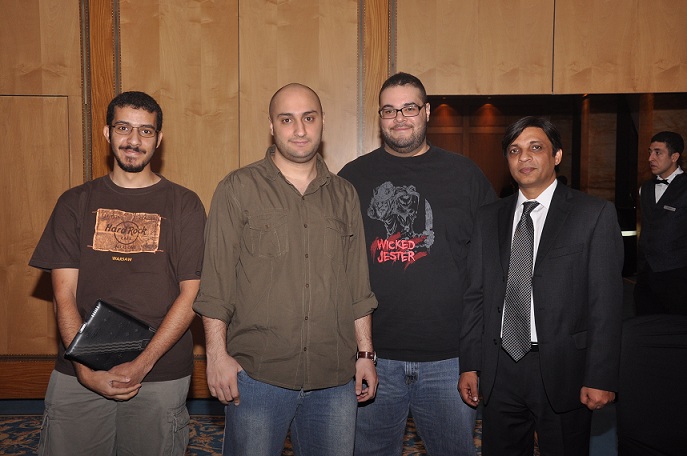