Dale Dougherty is, well, I couldn’t find anything better to explain him better than Wikipedia:

Dale Dougherty is one of the co-founders (with Tim O’Reilly) of O’Reilly Media. While not at the company in its earliest stages as a technical documentation consulting company, Dale was instrumental in the development of O’Reilly’s publishing business, was the founder of GNN, the Global Network Navigator, the first web portal and the first site on the internet to be supported by advertising, and most recently is the founder and publisher of O’Reilly’s new Make magazine.

Daniel Spangler is a really interesting guy who’s really involved in DIY fun projects. This is one of his:

In Wednesday, March 14th, 2012 by 23:49, I received an email from Dale Dougherty saying that he’s in Kuwait and he saw my Bacon vending machine.

To be honest, I had to read that email ~20 times to make sure that its real, not spam (I couldn’t believe my eyes to be honest! I mean, seriously, I’m sure the Nigerian prince sends you email because he’s suffering life and he has money for you, I had doubts that this would be the same!)

Anyway, long story short, I met Dale and Daniel yesterday for a chitchat and, well, I was just reminded why I love hardware tinkering and they woke up the 12 years old kid in me again!

Browsing through their magazines and seeing that I could do half of those even when I was a kid, but didn’t have the opportunity neither encouragement, made me remember how much I enjoyed breaking things trying to do other things or playing with LEGOs.

We discussed how we don’t have much electronics fanatics here in Kuwait and how the science club do a good job but with old stuff. Actually made me realize that I was so lucky to have a father who’d encourage me but I wasn’t exposed of how awesome what I’m doing now is ~_~

I also realized how kids got easily hooked up by just showing them how to turn on an LED light with a battery (Simplest project, but fun to watch nevertheless). If we tease our kids with simplest projects to attract them, they’ll get hooked so fast and start being creative! I know because I saw a kid holding a battery and lighting up two LED lights doing stuff 😛

After having to leave so they could make it to Mawaheb expo in The Avenues Mall, I started to realize how I (Or my blog since I’m almost the lone contributor here) didn’t get recognized locally because we don’t talk about fashion we won’t reach, copy/past things from other blogs with minor or no change in content, try to be reporters, review things that we’ll never own neither have our hands on, Barcelona vs AC Milan, “OMG VIVA SPONSORED MANCHESTER UNITED”, a car accident, “OMG ZAIN NOW HAS IPHONE4SSSSSS FOR 5KD IF YOU SUBSCRIBED FOR 2 YEARS”, a picture from 9gag, a video from Youtube, my mood/song of the day, “OMG NEW MAKEUP IN VAVAVAVAVAVAVOOOOOOOOM I WANNA DIE DIE”, diet fantasies, pictures of the best 10 cars/hotels/resorts/food/breakfasts/malls/toilets/hairstyle and basically the list goes on.

But instead, I got recognized internationally.

It’s a great honor and I feel a bit saddened because, well, we deserve to get local recognition in a way or another but we’re just not hip enough to have any 😛

Here’s a picture of Daniel, Dale and myself (In order from left to right) 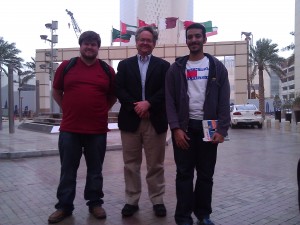 Here’s Dale and Daniel explaining how the pin works and how you’ll have to assemble it to get it: 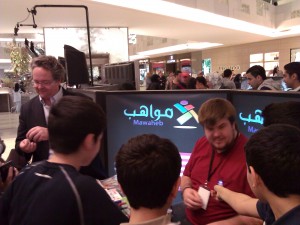 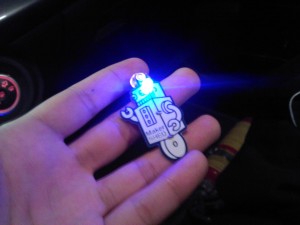 4 thoughts on “The day I met Dale and Daniel from MAKEZINE.COM”