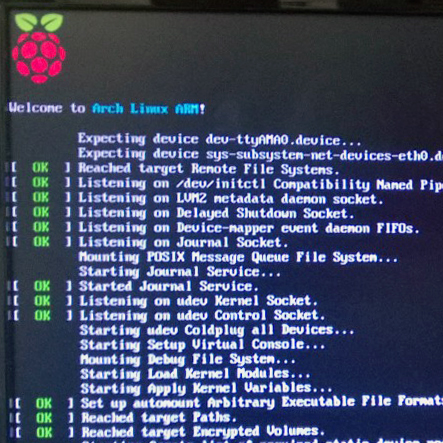 I came back from my vacation and decided to give my Raspberry PI a spin and see what I can do with it for my personal entertainment.
Many would start thinking of XBMC or something to turn it to something that’s network intensive and doesn’t really utilize other things.

I’m personally against that. You have a GPIO and a camera socket to play with. If I wanted to have an XBMC, I’d run it in an old Pentium 4 PC or an Atom-based machine.

My final project would hopefully be a controllable live streaming camera (And who knows, might end up flying that damn thing too!).

So, in this post, I’ll only document my steps to have an initial setup.

Given this link, I had the choice to either install RISCOS, Raspbian, or Arch. I decided to go with Arch. Why? Simply because it’s minimum, it’s linux, and for me to learn while I’m in the process.

And because I’m using Windows, I had to download and use this tool to burn the Arch image properly in an SD card.

After that, just kick it in and start using it. The root username and password are root. So you better change that. So here’s that I did:

So, my future plan for this toy is this:
To have a streamable video footage where I can control the camera’s axis. I’ll most likely end up attaching it to a roaming object and have it stream stuff in a different perspectives. I’m even wondering if I should add voice to it.

So yeah, next post will be about figuring out how the camera works on Raspberry Pi

Oh, so far, I followed this tutorial.

5 thoughts on “Playing with Raspberry Pi: Day 1 – Installing the ARCH”