No, no, let me rephrase that.

In and of itself, each attribute is far from uncommon; but that particular combination is so close to unique that I’ve yet to meet another individual who ticks all of those boxes.

And y’all thought “gamer girls” were unicorns?  Man, you got another thing coming.

There’s a lot to say about gaming culture in this part of the world and I have a lot of stories and personal experiences of my own to tell, but both of those fall into the “far from uncommon” category.  What I’d like to address is representation.  Particularly, representation for this niche demographic that I’m in.

Disclaimer right off the bat: this is partially in solidarity with other gaming minorities, and partially a call to appreciate small blessings.  It’s not meant to be berating or belittling, so if it comes across that way, please excuse the tone, as it’s not the intention.

Representation of minorities is a topic that comes up again and again in gaming culture.  Over the years I’ve read (and played) many works dealing with and discussing the topic of “[underrepresented group] in videogames”.  That isn’t even an active pursuit, just general reading as a game geek that accumulated with time.

The latest of these works is this one, on portraying blackness in videogames.  It’s an excerpt from an upcoming book that, according to the picture, also features the writing of Anita Sarkeesian, Zoe Quinn, and Anna Antropy, all three of whom I’ve encountered under the “women in games” category at some point, and either read about or experienced their work.  What I think of the people in question or their work, positively or negatively, is irrelevant under the current context; just reading the article and seeing all the name drops together finally got me to write my own representation piece.  Call it an open letter to other underrepresented demographics and even to developers.

Dear non-“American straight white adolescent male” mold-fitting stereotypes: Yeah, it sucks, but a token character is better than nothing, and way, way better than “faceless terrorist”.  Negative attention, in this case, isn’t better than no attention at all.  That’s where the disclaimer comes in.  This isn’t a “other people have it worse”, but “take a moment and smell the roses you do have”.

Women in games has been dissected often by people far more versed in the topic than I, so I’ll spare you the summary.  I will say I always read it with a sort of disconnect; only the part of me that’s a woman can identify with whatever’s going on in the work.  Are these games dealing with Muslims* besides shooter bait?  If there are, they are not prominent on the “AAA” nor indie scene.

* Altaïr doesn’t count.  Props to Ubi for the amazing Assassin’s Creed series which I love to bits, bar the bits that contain Islam and Arabs, being so far from identifiable, they’re laughable.  They’re not even trying to avoid being Orientalist (that’s a whole other article!).  To begin with, I didn’t even hear of the game as “hey, check it out,  an Arab/Muslim character!”, but rather “hey, you like stealthy games, right?  Try this one!”.  If there are other games, then they weren’t prominent enough to get on my radar.

Intersecting with TV, allow me to point out a huge pet peeve I’ve been sharing for some time, but never written.  Players, like viewers, are morons.  When Big Bang Theory first started, geeks cheered.  A few seasons in, there was this anti-BBT movement in some parts of the internet.  “Wake up, Sheeples!  BBT isn’t laughing with you, it’s laughing at you!  Watch Community instead!  Community has the best minority representation evar!”  Aaand the Arab Muslim is being played a clearly, visibly, identifiable Indian man.  Not even Persian or Turkish descent, who sort of look Arab.  Because the viewers are morons.  Again, this isn’t to discredit Community: it’s a fun show, often thought-provoking.  But you know what, anti-BBT movement?  At least BBT actually acknowledged their token guy is Indian.  Dear Readers, the level of suspension of disbelief here is if they dyed Lucy Liu blonde and cast her as Britta and everyone went around treating her like she was white, because why not, they both have light skin.  Now, I know we out here in the Middle East aren’t a part of the demographic producers and executives take into account, but I also know that there are so many Arabs and Muslims in America.  Those people are a part of the audience.  So are their friends, who can tell what’s going on at the very least on a superficial level.

I mention this to point out one of the most “inclusive” shows on TV, a medium which arguably has a little more room to experiment by simple govern of much longer history– and by extended logic, you’re more likely to find more inclusion in books than in film and TV.  So with games, the youngest medium, it’s understandable that we’re not there yet.

We aren’t even there locally.  There are plenty of Arab (and sometimes Muslim) developers and the number is rising, but they mostly fall into three camps:

So for many of us, representation isn’t really a big deal.  For us, all videogames are set in a culturally-alien universe, which we’ve learned to understand but will never be a part of.  At least, that’s the way it used to be.

As globalization kicks in, consumers are becoming savvy.  We know you know we’re out there, buying your games.  Maybe we’re not on your mind when you’re building the game, but we know you know.

Also as globalization kicks in, something else happens.  We can communicate that we know that you know.  We can now influence things, however little.  Check out Kickstarter backers on videogames, and you’ll find many of them are from around here.  And at least in one particular game, if you choose a particular set of options, you’ll find this: 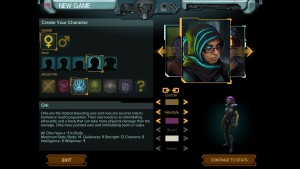 That’s Shadowrun: Hong Kong, the third in the modern Shadowrun series by Harebrained Schemes.  And yes, that’s me.

I was introduced to Shadowrun, the tabletop game, in university.  Although I absolutely fell in love with it (so much so that my character opted to die with her when Lone Star came to destroy the building that housed the sentient AI he fell in love with), my all-male group of geeks tended mostly toward D&D and M&M on occasion.  So when the first Shadowrun launched on Kickstarter, I was in.  Shadowrun Returns was the second-ever project I backed, directly after Double Fine Adventure – now Broken Age.  I backed it at $275.  Dragonfall soon followed.  When Hong Kong launched and I saw the $500 tier, which included having your portrait as a playable character, I pounced on the chance.

Fast forward to SR:HK launching.  Of course I chose my own portrait.  It’s a small victory, considering I still had to pick hair for my character model, because c’mon, the devs aren’t gonna put in all the extra time, money, and energy into a character model to satisfy the one person, especially not on a Kickstarter game.

And, of course, the illusion was entirely broken when I actually played.

Now, in before “but [this game/series/movie] has a Arab/Muslim character!”.  The keyword for me is prominent.  And maybe the second keyword being memorable.  We’re arrived at a point where the most populous minorities have a sizable sample of works to choose from.  Not as sizable as white male etc, of course, but still more sizable than the rest of us.

Oh, and I’m not helping either.  Sure, occasionally I can pay a little more on a Kickstarer for what amounts to personal satisfaction — because I sincerely doubt anyone else choosing a female Ork decker will pick my portrait, and if they did, I doubt the significance would register as “Muslim” rather than “cool looking head scarf”.  Anyway, after over ten years of conceptualizing, I’m finally working on my own game.

And there aren’t any Arabs or Muslims in it.  Because the games I played didn’t raise me that way.  Take that as you will.

(Also because I don’t have those kinds of resources and can’t afford it, but aren’t all indies that way? lol!)

So, underrepresented peeps, keep asking for more, but don’t forget to appreciate what you already have.  And devs, if you have those kinds of resources, stick in a hijab-wearing, practicing, Muslim, non-American Arab, highly-educated woman.  I’ll be your consultant.  Free of charge!