Link!  It was five days last week, Tuesday to Saturday, but due to work commitments, we decided to go Thursday through Saturday.

First impressions: Although there were a lot of people, it was deceptively quiet.  At first I thought it wasn’t as popular as MEFCC, then I realized something– all these people are bookworms!  No wonder it was so quiet.

We attended some workshops, some more memorable than others, and made the obligatory visit to Kinokuniya.  So, without further ado, here are the highlights!

Female Emirati Author / Arabic Science-Fiction trilogy.  Yes, all those keywords are part of the same sentence!  Noura Al-Nouman was an absolute delight to listen to and her first novel, Ajwan, is a pleasure to read.  And by “a pleasure to read”, I mean hilarious, because it sounds like reading dubbed anime, a fact she’s perfectly aware of!  It gets better after the first few pages, though!  Despite the stopping to laugh every few paragraphs, the story draws you in and makes you want to continue.  I haven’t finished it yet, but I intend to!  After all, I got a fancy autographed version!

Aspiring authors, I encourage you to contact her with your literary questions and concerns.  She might take some time to answer, but she will.

Meeting Jasper Fforde.  So until the age of [WAY TOO OLD FOR A KUWAITI], I had never been to London.  I know, I know, no nationality for me!  I finally went in April 2011.  Of course, I had to stick with the rest of the family, but I got one day to myself for all my geeky needs.  One of them was a trip to Forbidden Planet, which is a bookstore in case you don’t know it.  Among the books, I was there to get The Eyre Affair, by Jasper Fforde.  It was based on a recommendation, so I wasn’t sure if I’d like it.

Anyway, I found the book, and lots more of it, in a huge pile on a display table.  Lots of people around it, a long line.  Picked up a copy, took me a minute to realize– hey, that’s the author!  How cool is that coincidence, I’m there to get the book while the author is doing a signing!  Maybe I should–?  Naaah, I’ve got a ton of other stores to head to.  Besides, what would I say, “Buying the first book and saw you here, sign this?”

Since then, I read it and liked it.  I regretted it, too, because check out his website!  He seems like such a cool guy!  So FF to last week.  I told him the story and asked him to sign different dates, aaaand 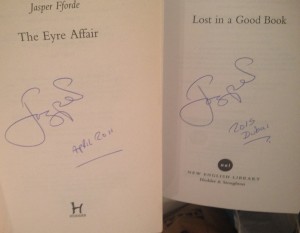 Shaky photo courtesy of Mr. Q8GEEK not holding the books steady while I snapped the shot with my iPhone.

And the best/worst for last, I saw a thing called “Rebuilding Our World From Scratch”, so I booked a spot.  The Mr. wasn’t interested, so I was on my own, and it’s a good thing too, because I went full awkward…

Here’s what happened.  The presenter was Mr. Lewis Dartnell.  I didn’t know who he was and I wasn’t sure to expect.  He walks up on stage.  Average-looking fellow, nothing particularly remarkable about his appearance.

Then he opened his mouth and started saying history and science and post-apocalypse.

SHAUN.  I know, I know, but check out the book’s website for a second.  It’s all this survival stuff and how to hack stuff together to make them work when you haven’t got an infrastructure to work with.  Presented by the next best thing to Danny Wallace going out there and getting degrees in astrobiology, which Mr. Dartnell has btw, so cool!

When it was question time, I got the first question. “Have you ever been told you resemble Shaun Hastings?” “No, who’s he?  Is he handsome? He’s ugly, isn’t he?”

Afterwards, I went to get my book signed and practically quizzed the poor bewildered scientist-historian man about other stuff relevant to the post-apocalyptic subjects.  Primarily Assassin’s Creed, obviously, but also The Colony, Civ:BE, and Fallout.  And Minecraft!  I think I freaked him out a little.  If you’re reading this, sorry about that!  It’s not every day you meet someone who has an uncanny resemblance to one of your favourite characters.

…hey, there’s no official word on who they cast as Shaun for the AC movie.  If they’re not getting Danny Wallace, it better be Lewis Dartnell.

In short, we had a great time and authors are wonderful people!  And we didn’t even attend that many events.

Hey, speaking of Assassin’s Creed, my ol’ laptop can’t run Unity or Rogue.  Does anyone want to gift me a shiny ASUS?