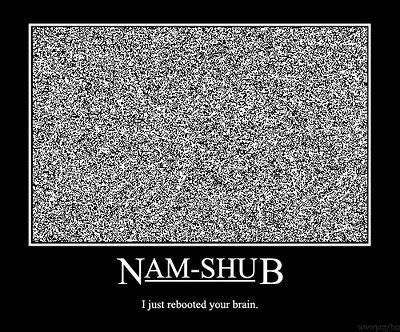 A friend of mine shared this video with me today like “OMG SNOW CRASH IS BECOMING A REALITY LULZ”:

There’s no way in hell this could happen and it’s basically some bullshit someone decided to pull out to get parents freaked out and maybe few more hits and views (Or dumb government officials *ahem*).

Basically, according to the news (Both video and link), this kind of new digital drug is vicious and killer and prevent it and OMGISTHATGODZILLA. Well, it’s not.

Here’s a short version of this phenomena:

This is called “Binaural Beat“. In simpler explanation, it’s an acoustic illusion that affects the brain when two audio sources have slight differences in frequencies. It’s the same effect you’d get from meditation, listening to relaxing music (AKA Death Metal), listening to horrible music that’d give seizure (AKA Dubstep), listening to whitenoise, and so on and so forth.

That being said, it can have an intense effect if your brain is hypnotize-able or you’re easily affected by Placebos. Otherwise this isn’t any better than listening to Enya, for example or maybe صبوحة خطبها نصيب.

Just google “Binaural Beats” and “I-Doser”. I’ll make it easier for you:

Or hell, just search for those two terms in Reddit. You’ll read people’s experience in it and thoughts.

If the wikipedia links are too TL;DR, check these two out:

One thought on “Digital drugs? lulz”