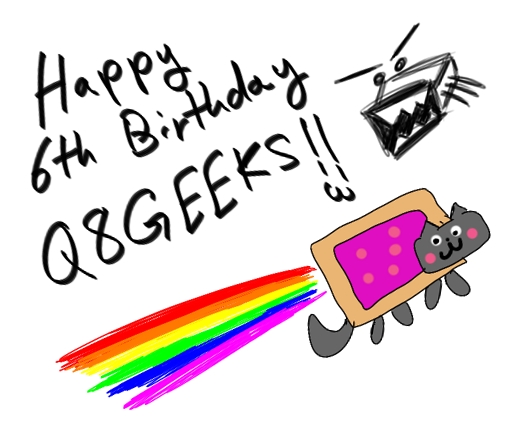 Yep, six years of blogging.
Still keeping it as unique as possible (At least by Kuwaiti standards). Even though I’m not as famous or ass kisser compared to %99.238746289374263847 of the other Kuwaiti bloggers who seek sponsorship or freebies, I’m happy to write whatever I like to write, however I like to write, without losing the innocence of my blog’s spirit and my passion or having to act like a celebrity and maintaining a public image that’s different from my natural one.

Silent readers, those who I referred to in many DIY posts, I deeply and honestly thank you for your existence. Q8GEEKS wouldn’t have existed if it wasn’t for you.

Let’s take a look at the goals I’ve set back last year and see what I’ve accomplished:

1. I will not write a review or impression of a gadget that I don’t own or poorly reviewed by 28374629383 other Kuwaiti bloggers.

So, I nailed the gadgets review. Funny thing, I don’t remembering reviewing a gadget even though I got some interesting things to play with. But yeah, I nailed that.

2. My hands will be covered with solder stench, cookie crumbs and grounded coffee (I do this when I’m in trance with coding)

I also nailed getting my hands dirty with electronics and coding stuff. Not to a satisfying extend; work have been abusing. But I finally got sense of a pattern where I can sit down and actually have a me time to code and geek around

3. I will spend more time with the blog and Q8GEEKS in general (Probably a podcast, comic, or even peanuts).

Eyyyyeeeeaaaaaaaah… That is a tough one… I’ll have to do something about it. Finding those who’d cooperate in random things to do together is tough.

Wasn’t so far off though, I made a small script to generate a random string to be used as a password and copies it to clipboard… That’s something!

5. I will build an instagram alternative for great justice!

Yep. Ignoring that… I was enraged (Although I’d consider doing something similar only when I’m out of ideas)

6. I will still lurv mudkipz!

7. I will do a geeky thing a week and just post about it (Probably includes torturing my nieces and nephews… That sounds nice)

Apparently, a weekly post was virtually impossible that year; work been abusive (Not Abu Yousif, damn it!) and I finally started to find free time to do stuff. As you can see, I’m poking around with the randomest things

So basically, I’d say I did half of the goals I set. Which isn’t so bad.

What I’ve learned from last year:

I hope I have the right energy and be encouraged to post more stuff in Q8GEEKS than I did last year.

I hope the silent readers would actually kick in a comment or two and interact. After all, this blog was made for you, guys.

I hope I find more people to participate and write in here too! It’s Q8GEEK(S) for a reason, y’know.

I thank god for allowing me to live until this moment.
I thank family for existing in my life.
I thank my friends who, without them, my life would’ve been miserable.
I thank those who did the smallest things that opened up my eyes on worlds and universes that I wouldn’t have explored without their minor involvement.

And I thank you for reading this post, whoever you are.