Just like any Microsoft fanboy, I bought a Windows Phone 7 (HTC HD7). And to be honest, I enjoy it (It’s just the lack of apps that sucks… And support for Middle East Market).

Anyway, I downloaded an app called “Get Bacon” which I knew it’ll be something related to the “Press button, receive bacon” meme shown below: 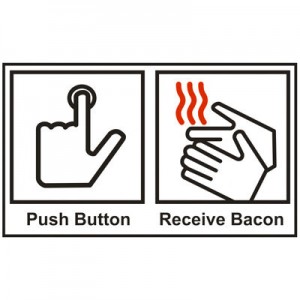 I’ll quote a part of whats written in the “About” page of that app:

Hand dryer manufacturers all over the world play cruel jokes on unsuspecting bathroom visitors luring them to press a button with the promise of receiving glorious bacon. These poor saps press the button and just get a lot of hot air.

The guy took upon his responsibility and made a WP7 app that downloads bacon pictures off Flickr under Creative Commons License.

I took upon responsibility to make that machine a reality. Not as close what I wanted, but close enough 😛

I used a shoe box, tractor belt, continuous servo motor, light stand and Arduino (with few electronic junk such as resistors, transistors… etc) and built it in total ~8 hours including theory, planning, assembling, coding, fixing mistakes and errors (Coding and hardware) and trying it the first time there at Barcamp Kuwait 3!

This project was similar to my graduation project. Worked fine back home, but blew up at the professor’s office while demonstrating (Which is why I asked @ahamshay to prepare a fire extinguisher just in case :P)

And, if you remember my Cookies Vending Machine, you’ll know I made this for the hell of it, not as a serious thing (Which explains why I used a shoe box; couldn’t find a hand dryer chassis)

I had issues thinking of the dispensing and cooking mechanism. But thankfully, I made it through except for the cooking part.

The light was as weak as 40watts and was so far that the bacon was cold. So as far as the machine goes, it was a success. The only failure was actually having the bacon cooked (Then again, I eat Sushi and raw food. Eating a cold bacon isn’t an issue :P)

You can see the video here (Again):

Anyway, here’s the circuit diagram and the mechanism diagram:

Note: I forgot to mention this; the +5v and GND are connected to the Arduino board’s +5v and GND. 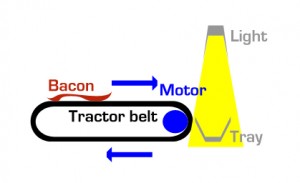 One last note:
DO NOT DO WHAT I DID! That was totally unprofessional, unhealthy and illogic (ill-logic). If you can improve it, keep on pumping. Otherwise, don’t!