Alright, back to business. Seriously, I’m missing writing in here.

Now, many would argue or debate over how to hold their camera, well, I’ll share my experience in holding cameras and why I do and don’t.

Seriously? You’re talking about how to hold a camera? Pffft, noob! I HAS THE CANONZ 5D WIZ ZEE BATTAREYA GRIP!!

No really, lets get serious here. Knowing how to hold your camera is so important because 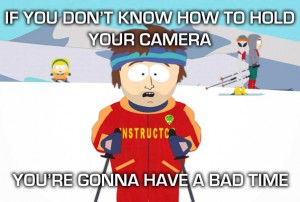 Think of it this way:
Hold a flashlight (Not fleshlight, you nasty you) or a laser pen and point it to a wall thats 5m ~ 10m away from you. Yes, you see how shaky it is? Your camera is like that!
You will NEVER be able to stabilize it with your hands. But you could minimize things down.

Why? Because the guy is RESTING the camera on his palm which makes the camera much more stable than the hot chick with the hard helmet (Seriously though, whats with her pinky?). Another thing to take note of is elbows; the closer they are to your body and not placed away as if you’re going to fly like a goose, the better. Because your arms will sort of act like a tripod.

But I’m supporting the camera with my palm! YOU LIED TO US!

Well, you forgot about elbows. ELBOWS!! DON’T BE AN AIRPLANE TRYING TO FLY!! CUDDLE YOUR ELBOWS TO YOUR BODY!!

But that’ll hurt my wrists

NO PAIN NO GAIN!!

Seriously, you might think “Whatever, I’ll hold it the way I’m comfortable with”. Just don’t regret the blurry pictures you had BECAUSE you were so comfortable.

Also fellow photographers, if you see anyone who holds the camera wrong, please, you’re entitled and actually encouraged to BEAT THE HELL OUT OF THEM WITH YOUR MONOPOD! (+10 POINTS USING TRIPOD!)