I’ll start with pictures of the Iraqi invasion of Kuwait in August, 2nd, 1990. 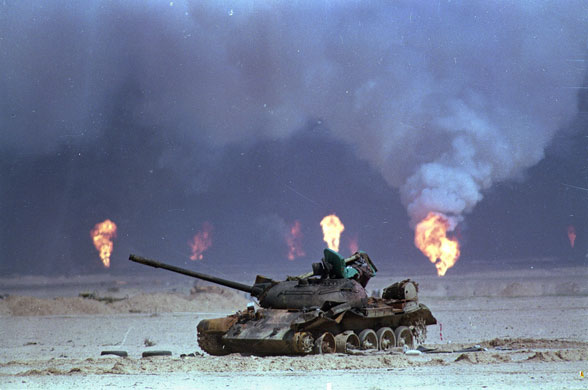 Yep, today in 20 years ago, Kuwait got invaded by Iraq. What happened back then was so bad in so many levels. I was 5 years old and my family have been snuck out during the invasion\war so I (thank god) haven’t suffered much compared to those who lived through the invasion.

My civilian POW (Prisoner of War) cousin that died as an innocent civilian prisoner of war (Which found out about his death more than atleast 10 years after the invasion) leaving a family behind.

Palestinians providing Iraqis intel and actually joining their side even though Kuwait provided them shelter and life quality that were as good as local citizen ones if not any better. They’re not the same? Atleast not anymore? I yet to meet one that’s not.

The loss occurred to Kuwait from civilian mass murders committed by Iraqi forces, environmental caused by burning our oil fields or demolishing our landscapes and constructions including “Om Al-Aish” comm-station (I remember it because I took photos there).

Things would’ve been way worst without the Desert Storm operation and whoever contributed in it.